Nicole Walker: ‘We see no limitations for Leicester’ 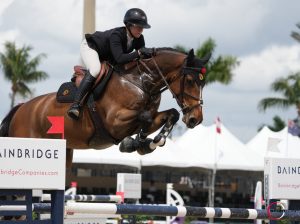 There is nothing as satisfying as seeing our former auction horses doing well with their new riders! One of the most promising references of The Youngsters Auction is without a doubt Leicester. Now owned and ridden by Canada’s Nicole Walker, the 6-year-old Leicester has been showing off at the WEF 2022 circuit and is one of the most talked about youngsters in North America. “Leicester ticks all the boxes – the only thing holding him back is his age!”, Nicole Walker tells about her future star.

Last year we had the pleasure to do an interview with Olympic bronze medallist Cian O’Connor about the 2019 auction reference Leicester – this year, it is his current rider and owner Nicole Walker who shares her thoughts on the impressive gelding by Harley VDL. “Cian saw Leicester in Norway and went to try the horse. Afterwards he called me and told me Leicester would be a perfect horse to join my string of horses. I watched the videos of the trials and there was nothing not to like about him!”, tells Nicole Walker about her first thoughts about Leicester.

‘I totally believe in him!’
After becoming Norwegian champion as a 5-year-old and then joining team Karlswood at the Sunshine Tour, Leicester caught the eyes of many. “I have never had so many calls from people about a horse as with Leicester. Everyone was so excited about him! When I finally got to meet him here in Florida, the feeling was immediately as I hoped. He ticks all the boxes; any exercise you do with him, he figures it out straightaway. And it feels as if he has the scope to jump anything”, Nicole continues.
Canadian rider Nicole Walker has had great successes at the highest level over recent years, especially with her recently retired horse Falco van Spieveld. “Cian told me that Leicester was very similar to Falco in many ways and I couldn’t agree more. It is still a very long road for him, but we see no limitations with him. I totally believe in him!”

Already the barn favourite
As an only 6-year-old, Leicester is one of the younger horses Nicole has been riding. “Usually when I buy young horses, they stay in Europe to be developed, but Leicester fit in the string. It is really exciting to work with him, he doesn’t feel like a 6-year-old. Jumping in Wellington since January, he has had maybe two rails down; he is so consistent in the ring. For this season, his schedule is not too full. I bring him over to Canada now and will do some shows with him there. In the end of the year, there is a final for the 6-year-olds, so normally we aim him for that. We give him the time to develop and do not push him at all”, Nicole emphasizes.
All in all, Nicole Walker can only praise Leicester. “He is already the barn favourite! All the gears are there, we only have to give him his time. I am so thrilled for the future with him!”, Nicole concludes.